The City of Pasadena, Texas Parks and Recreation Department: Athletics Division (COPT-PARD-AD) offers two Men's Recreation Level Basketball League. We can only accept 10 teams per league night. Therefore, the first 10 teams to register, are in. Absolutely no exceptions! We will offer two league nights: Mondays and Thursdays.

These leagues run year round. As soon as, one league ends; the next one starts up two or three weeks later. Therefore, our patrons will be able to sign up or register to secure a place in the next league, while the current leagues are taking place; or, at any time of the year.

Each league runs for a 13 week stint. 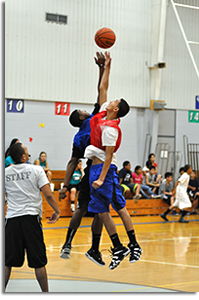